iPhone XR and iPhone XS Which one’s right for you?

The new iPhone X has four different models and sizes to choose from. The iPhone X, iPhone XR, iPhone XS
and iPhone Xs Max are all models that use a “button less” home button instead of the traditional round
button. Another feature that is common among all of the new models is the face ID. There are a lot of differences between all of them but the front “selfie” camera is the same on all four.

The actual measurements are in line with the screen size but the depth is different on the XR. OLED displays are thinner than LCD because of the absence of a back light so the iPhone X, iPhone XS, Xs Max
are thinner.

Compare iPhone Xr and other models

The iPhone X comes with one nano-SIM card but the iPhone XR, iPhone XS, and iPhone Xs Max now have a dual SIM
tray that can hold a nano-SIM and an eSIM.

Welcome to the new world. Apple has finally decided to make it personal when it comes to repairing their cellphones. For the iPhone 7 screen repair, transferring the home, button has now become a do or die situation. Make sure your technician is up to date  on the correct way to remove the home button from the broken screen. If it is done incorrectly the home button may lose its ability to recognize the Touch ID.  Or worse it may render the button inoperative.

To fix the iPhone 7 screen correctly,  you must first diagnose the extent of the damage to the broken screen. You should test the device carefully. Paying close attention to the home button. You need to make sure it’s recognizing the id and the haptic touch is responding. If it’s not than replacing the screen will not correct the problem. and the device can only be repaired by Apple.

There are many options out there to get your iPhone 7 repair.  Choosing the right one can be a daunting task. If you own the iPhone 7 or a new model,  you shouldn’t base your decision on price alone. To do the iPhone 7, 7+, 8, and 8+ screen repair correctly,  the technician must be trained in transferring the home button on these four models.

iPhone 7 repair can take anywhere from 30 minutes to 45 minutes to complete. These new devices are different from the older ones, and every device owner needs to be aware of the differences. Give yourself plenty of time, don’t wait until the last minute to get the broken screen repaired.

Fixit Phone Repair knows the correct procedures on iPhone 7 screen repair.  Same as iPhone 7 plus repair, iPhone 8 and 8 plus repair. Our technicians have received extensive training on the correct way to recognize the extent of damage to the device,  as well as the proper procedures for removing the home button intact and transferring it onto the new replacement screen. 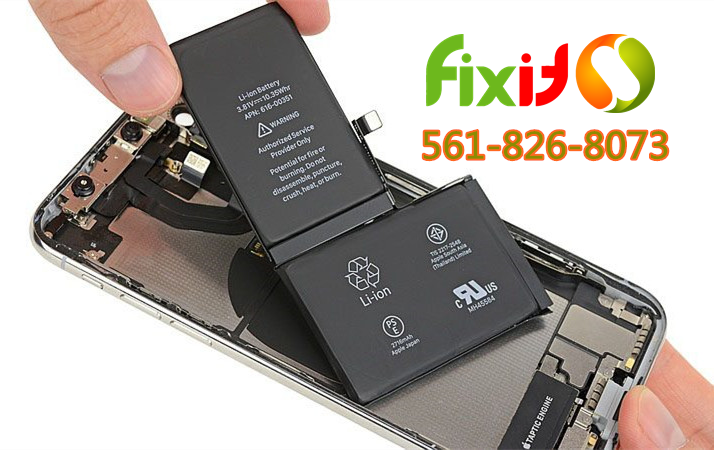 I just moved to Boca Raton, FL to start school at FAU and I dropped my iPhone X and broke the
screen. The apple store wants way too much money to fix it so I need another place that’s
cheaper but reliable. I heard that it costs more to fix this iPhone x screen because the LCD  is more
expensive than previous iPhone LCD’s. I asked my techie friend why this was and this is what
she told me.

What is Difference between Mobile Phone Repair & Mobile Screen Repair?

Is there a difference between mobile phone repair and mobile screen repair? If you refer to your cellphone as a mobile or mobile phone than there is only a small difference. This is how many people in the world refer to their device as the mobile phone preceded the cellphone, by name only.  But, in the USA the term mobile phone repair or mobile screen repair has a different meaning.  In the US, the term mobile means the repair service meets the customer at a designated spot.  The term cell, cellphone, or just phone have become the most popular ways most Americans refer to their devices.

Recently we had a customer call and ask if we did mobile screen repair.  We told him that we can pick up the device bring back to store for repair.  The customer was so confused about what we said. He told us that he could bring the device to us he just wanted to know if we did screen repairs.  Of course we are in cellphone repair business since 2012 and fix most device. After explained what mobile screen repair means to us in the industry it turns out the customer was from England.  He told us the term mobile means phone or cellphone in the UK.  It makes sense once you understand that different cultures use different ways and means to express certain ideas and terms.

The idea of meeting a customer someplace to do a repair in the US is often expressed as mobile phone repair or mobile screen repair. The difference between these two phrases can also mean the difference between fixing just the screen as compared to fixing any issue with the phone.  Completing a mobile phone repair requires the technician to have an inventory of all the different parts to all the different models.  Most services that travel only do mobile screen repair, it’s by far the most common repair and the parts are manageable.

Recently Apple admitted that its operating software update affected the iPhone 6 and 6+ battery performance.  They even had to offer a reduced iPhone battery replacement price to appease many of their customers.  When Apple designed the iPhone they never entertained the idea of maintenance instead they encouraged employees to sell new phones.  Many iPhone customers replace their devices within two years so that’s why there is no maintenance plans.

In order to perform an iPhone battery replacement you must be careful when removing the old battery.  The lithium battery is very dangerous and can ignite quite easily if gets punctured or is overheated.  Every iPhone uses the same type of battery which are lithium-ion polymer battery.  These types of batteries are present in almost any devices that uses “rechargeable batteries” and are very reliable.  When you complete an iPhone battery replacement you are replacing the old lithium battery, not recharging it.

When the iPhone was designed Apple intended the battery to last for a thousand charge cycles.  What that means is if you plug your phone in to a power source it’s considered one charge cycle.  The more you plug the device in the more charge cycles you’ll accumulate.  So the best practice is to charge the batter fully so you don’t need to plug it in more than once per day.